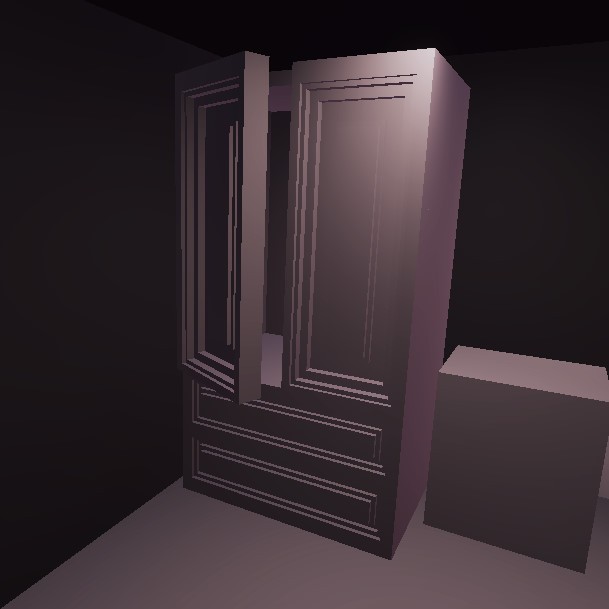 Not yet implemented and missing a few bits but its an improvement over the placeholder cube I had before. This is about the only thing I got done on the project this week as an experiment with Volex for art. Not 100% sold on it, so gonna try and re-learnt the controls in blender again soon (I’m used to 3DS Max but no way can I afford a licence for that xD).

Next week is going to be mostly project planning for the prototype, I want to nail down my tasks for a release build. Start writing out what story elements are going to be in play and the dialogue for said bits as well as what goals the player has in the flat scene to complete the section in the prototype. So next week’s post will have a lot about the story and background of the main character if all goes to plan xD I’m hoping to wrap this prototype up by end of May at the latest so I can try out some other ideas I’ve had so not to get burnt out as much. Then dependant on reception and how I feel about working on it further, I will decide its fate. 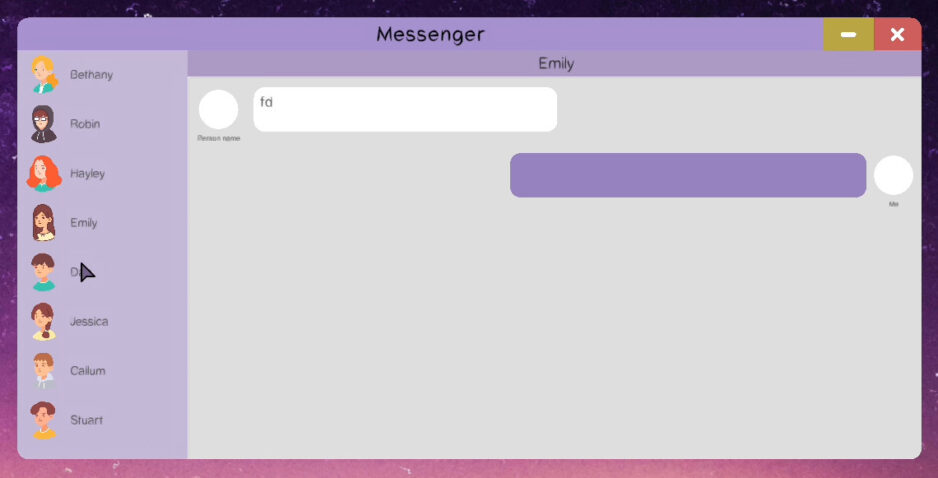 Hello all, once again it is that time of the week, time for another development update. Like with the last few weeks this week was focused mostly on the computer systems. But a little more got done this week due to some apps needing a little more development of their sub systems for their implementation to function. These being the dialogue system for the messenger app & music player (audio manager) in the music app.

Both the photo & mail apps have their functionality working as intended. Here what each of them do now.

While still a little programmer arty, the photo app now has functioning categories, meaning the photos can be set into groups for the user to browse. The app also has a preview setup where the photo is put mostly full screen on the app window with options to close the preview or navigate to the next or previous image in the category. Each category also now displays the number of photos they contain. Currently it is even, but that is just because of the test setup. They do correctly update to the total in the category.

The mail app now has the mail area showing the message you select. The app is only intended as a lore area so the user can’t actually send emails. The messenger app is intended to fore fill that role in the game. Here the user will be able to look through and read old & new emails.

The music player app has had a little of work to it. Mostly on the controls side of things. The music playing side of things still needs a bit of work on the music plyer itself which I’m doing on my work day mornings so I should be able to get that working as and when.

While no messages are displayed yet, the layout and some of the people in the story are in the backend with their names and placeholder photos on the sidebar. Clicking one of the people sets the display to show the messages between you and said person. More on the people will be coming in future weeks, avoiding spoilers of-course. The messenger side of things will work like you’d expect, though your replies will be pre-defined as its just easier to manager the dialogue that way.

The flat scene has had some improvements this week. Switching from HDRP → URP was a move I made this week as I know more about URP and what it can do as well as how to set it up correctly. The player now has auto-saving, with an icon (rose currently) that appears when the user has hit an auto save point. Currently this is just when the user opens the laptop, but more will be around the game in the future. Because of the auto saving I was also able to get the chapter states setup so the user now correctly remains by the laptop when returning from the computer. This also means the player is correctly positioned to where they last were in the game on reloading which is also handy.

That’s about it for this week. Next week I have less time to work on Project Tilly due to being out most evenings in the week. But I’ll get what I can done in the time I have on fixing an issues in the game currently and start adding more interactable elements to the flat scene. 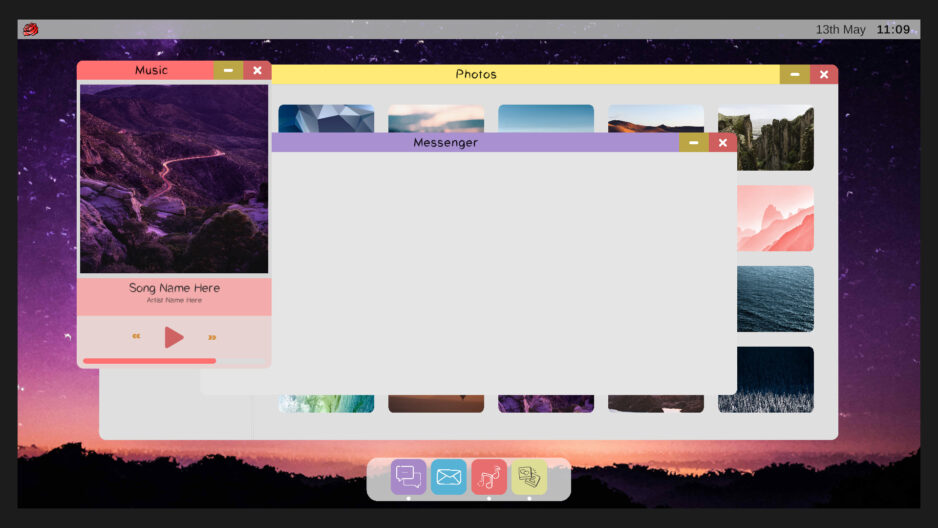 Today marks the end of week 8 of development, a quieter week this week as I got a little side tracked with some experimentation in C# and other life events/chores taking up a fair bit of the free time this week. Still there is a little progress to show, so here it is.

A little backed work has been done to more than 1 app to be on screen at once. In last week’s version the setup meant all apps would close when you minimised any of then. A simple mistake on my part for forgetting how my panel system worked. Splitting each app into its own canvas solved that issue easily. Along with that I’ve simplified what apps are on the laptop to the bare minimum for the prototype so I don’t spend months on this system xD

The music player is going to have a few tracks on it to set a calming mood, the user will be able to pause and resume the tracks and the music will persist, so if the user starts playing music and then leaves the computer, the music will keep playing from the laptop until turned off.

Photos will show a few photos in a few groups for the user to explore and look at, mostly for story telling but the user will also be able to change the laptop background via this app if they wish.

While not blocked out yet, this will be where the user can communicate with the protagonists friend and family. The responses will be pre-determined by the user will have some intractability with the app and some visual effects for when they receive messages.

Apps now also show a little indicator when they are open which persists unless they close the app with the red x button. Apps can be focused on my pressing the app in the drawer, I hoping next week to let the user also press the window to do this. Apps also have a coloured header and different sizes based on the app itself.

That’s about it for this week , next week will be more of the same, but hopefully linking the computer into the game more and getting some of the apps functioning. 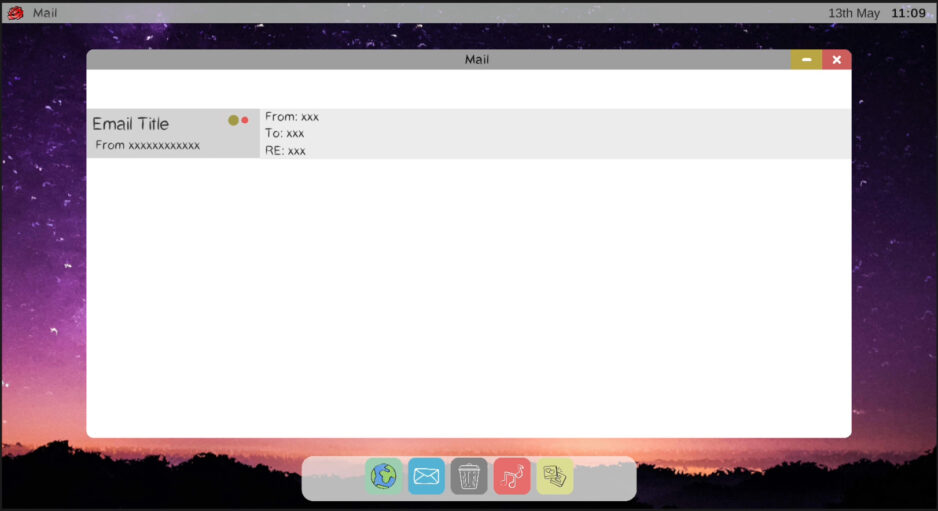 Hello again y’all. Today marks the end of week 7 working on Project Tilly with some good progress to so. Last week I mentioned that the next mechanic I would be working on was the computer interaction. Where the player could interact with a UI interface which would function like a normal computer interface. I also mentioned that this would take a few week to get sorted, which was a good call on my part, as I is going to take at-least 2 more weeks to get setup if not longer.

The main chunk of progress this week is with the UI side of the system, which can be seen in the video below:

The UI follows a kind of MacOS style with a few differences here and there. As I don’t actually own a mac I am going from online references and a Linux distro called Zorin which has a layout in a MacOS style which I run on my laptop.

Some of the little details

I’ve created a modular system for apps which mean I can create more or less any app I like. The app icons are set by data so they are easy to define, while the panels that pop up when you open them are prefab variants that all derive from a base panel which has the buttons to minimise & close the app as well as the app name header. To save myself the headache of UI scaling, I’ve gone ahead and not added a expand to full screen button, I wouldn’t really need the full space to show the story.

Pressing shutdown moves the player out of the computer scene group & back into their previous group. Currently this means you wake up each time you leave the computer which is kinda funny.

Last week I mentioned some work on Multi-scene, a code library I’ve created to help run games with more than 1 scene area which makes things a little more modular. I’ve been doing more this week, which has led to it being in a broken state. Yea I’ve been working on adding options to disable scenes without unloading them which meant I ran into some issues with the old system and getting it to load correctly. Its been fun…. debugging that.

That’s about it for this update, the next week will be more on the computer system & scene management to get it all working again xD 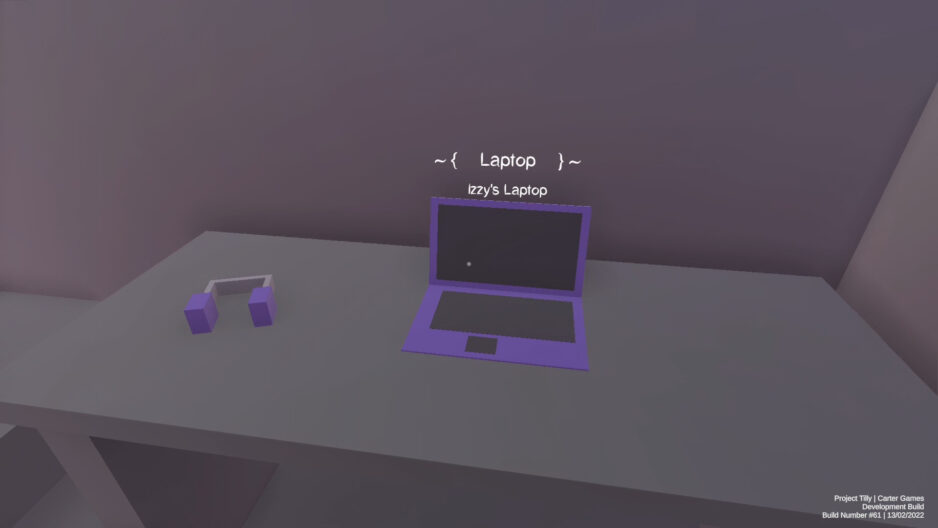 Today marks the end of week 6 of development on Project Tilly. This week’s plan was to fix all the problems currently in the game so I could move forward for more stuff in the coming weeks. This has been achieved mostly, with a lot of little issues fixed and some obsolete code removed.

Here’s a little preview of how the existing content looks now, with a few UI adjustments to make the system feel a little more polished.

Some of the issues fixed include:

Next week I’ll be moving on with computer system mechanic, where the player can use devices such as laptops & phones in a similar way to real life. This won’t be done in a week for sure, but it should only take a few weeks to get sorted so I might as well get started.